When we woke up this monday morning, Nicole was a living, breathing manifestation of the joyous energy we soaked up in Tobago this weekend.   She was perky as can be, despite a short night.  Living proof that we live in an amazing world, and can embody our joy or our sorrow.  This morning, she is choosing joy.  Her eyes are packed full of the richness of our discoveries and explorations of Trinidad’s sister island.

There were moments, during our trip, when she chose to embody sorrow. 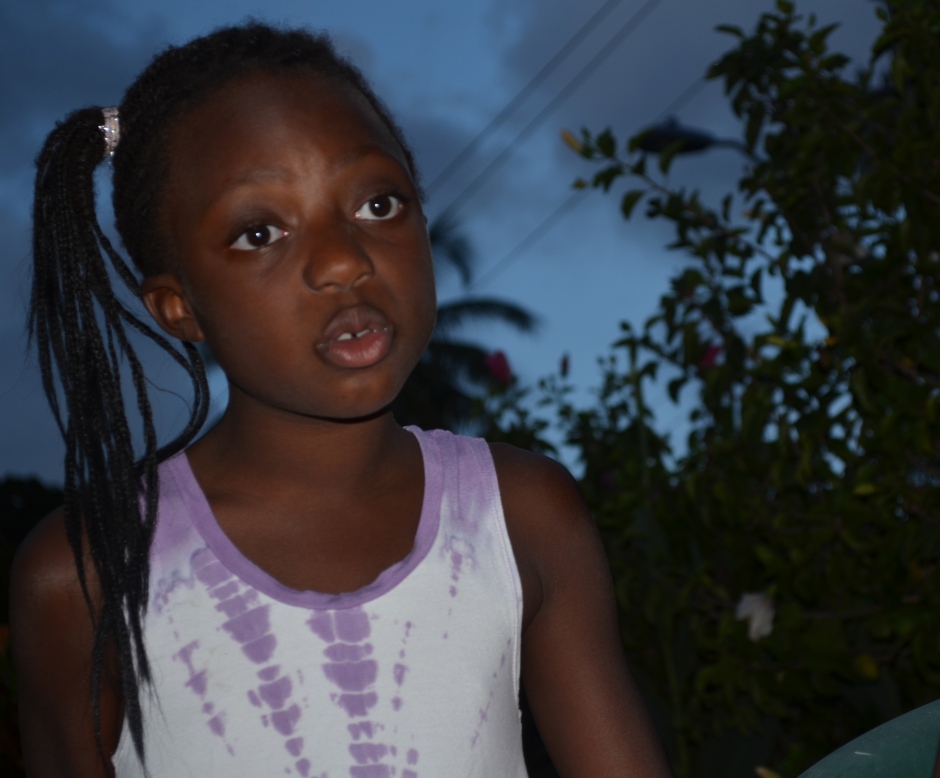 Especially the sorrow of having to go to bed when the pool is still warm and the sky is still full of wonder.

Since she was born, I have been awe of her sweetness and expressiveness.  This portrait I did of her when she was a baby begged for a honey pot bursting with the sweet nectar and a lively dancer. So there it went.  Spewing hearts to boot.

Little did I know I would get to watch her dance her sweet expressive ballet beneath a majestic series of waterfalls deep in the rainforest. 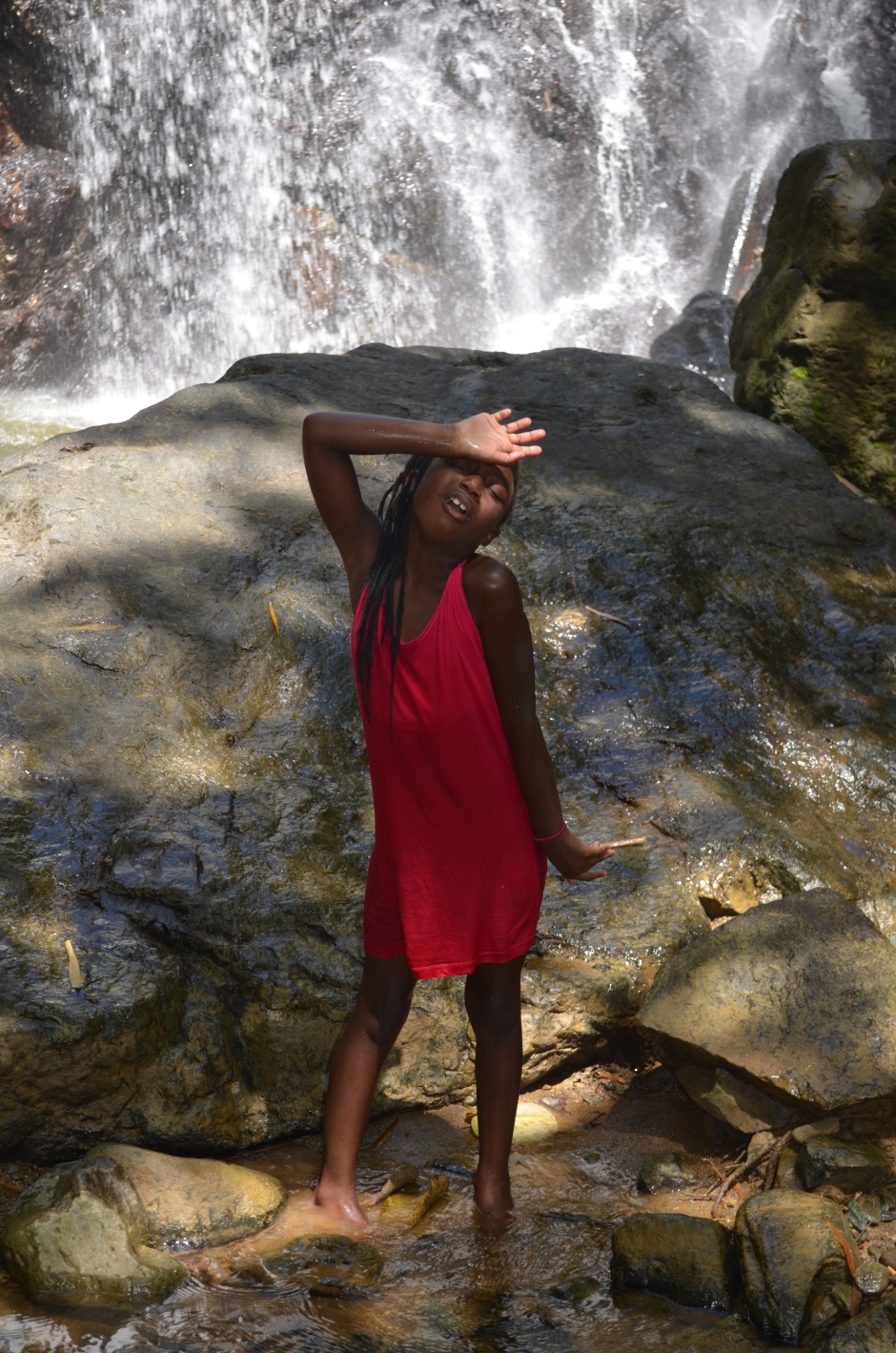 Elias was pretty joyous himself his weekend, but not so much Monday morning.

He said he couldn’t stop smiling, even though the ocean water was dribbling through his mouth from the sides of the regulator.

His smile wouldn’t quit because he had just come eye to eye with a Hawksbill Turtle.

When he was four, I drew this Acimboldo-esque portrait of him, full of images from nature, which has always been a source of fascination.

Knowing how much he loved the sea, I put it right there on his left cheek.  And this weekend, he got to be under it,

in it, breathing in the quiet magic  of it all,

noticing how much purple there is in the coral reef,

and how big and unintimidating a nurse shark really is,

when it is sleeping.

And you aren’t too close to it,

but close enough to want to touch it. 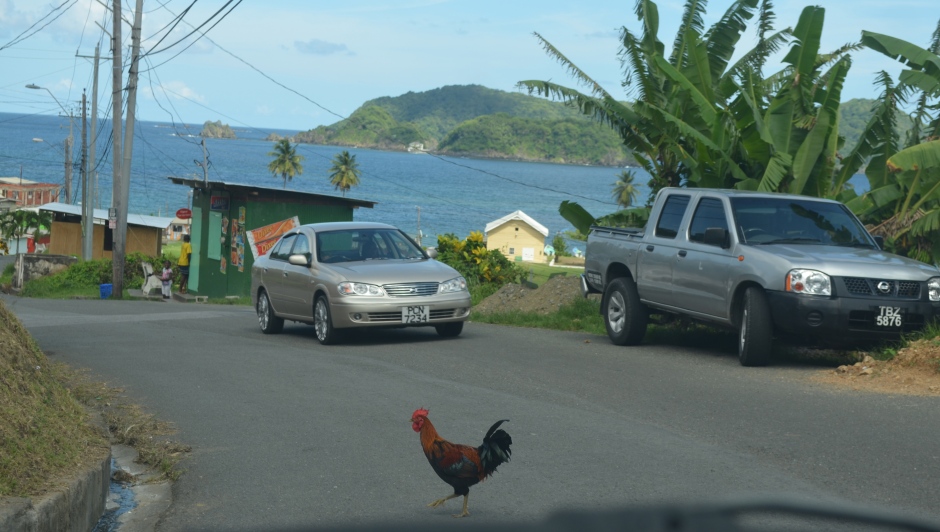 Now if you really want to know the answer to the age old question of why did the chicken cross the road,

I can tell you it is because she wanted to get to Tobago.

I mean, why wouldn’t she?

There you can find lime green churches

Not to mention the tie die and jewelry 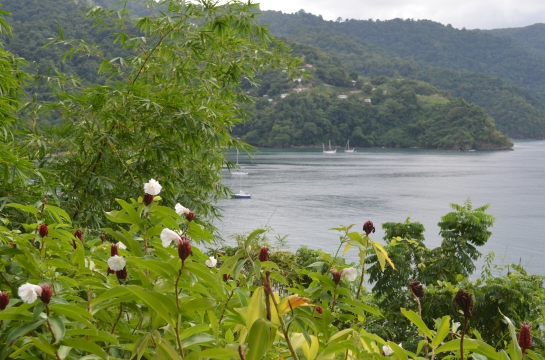 and the hidden hikes that lead to sacred places like Pirates Cove and Argyle Falls.

Normally I wouldn’t pick up hitchhikers,

but since she had a nice smile  and wearing a pretty pink dress,

we figured she was safe. 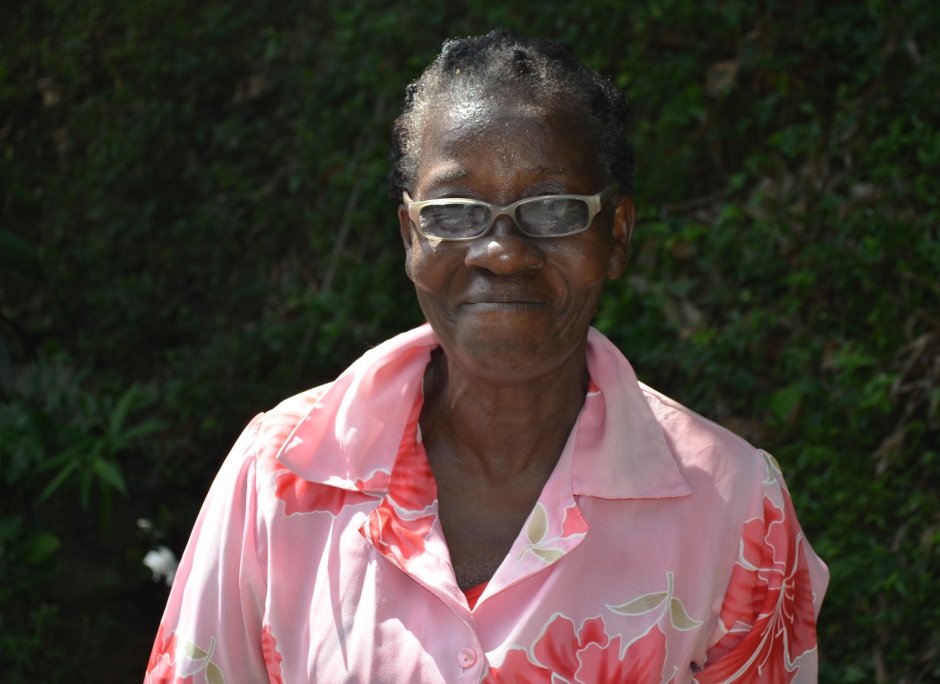 When she hopped in the back seat, she told us that she was preparing for her wedding.

She met her fiancé at church.  I asked her if it was love at first sight.

She smiled this half-smile and said

“Well, my husband died 28 years ago, and just last year I started going to church.”

(I’m picturing the lime green one in my mind)

“He saw me, and asked me if I would marry him.

I tot about it for five minutes.

She sewed an off-white wedding dress, and her family will be coming to Tobago from far and wide to attend this special event.

We dropped her off at her house, and we wished her well, as headed up the lush green path to her house. 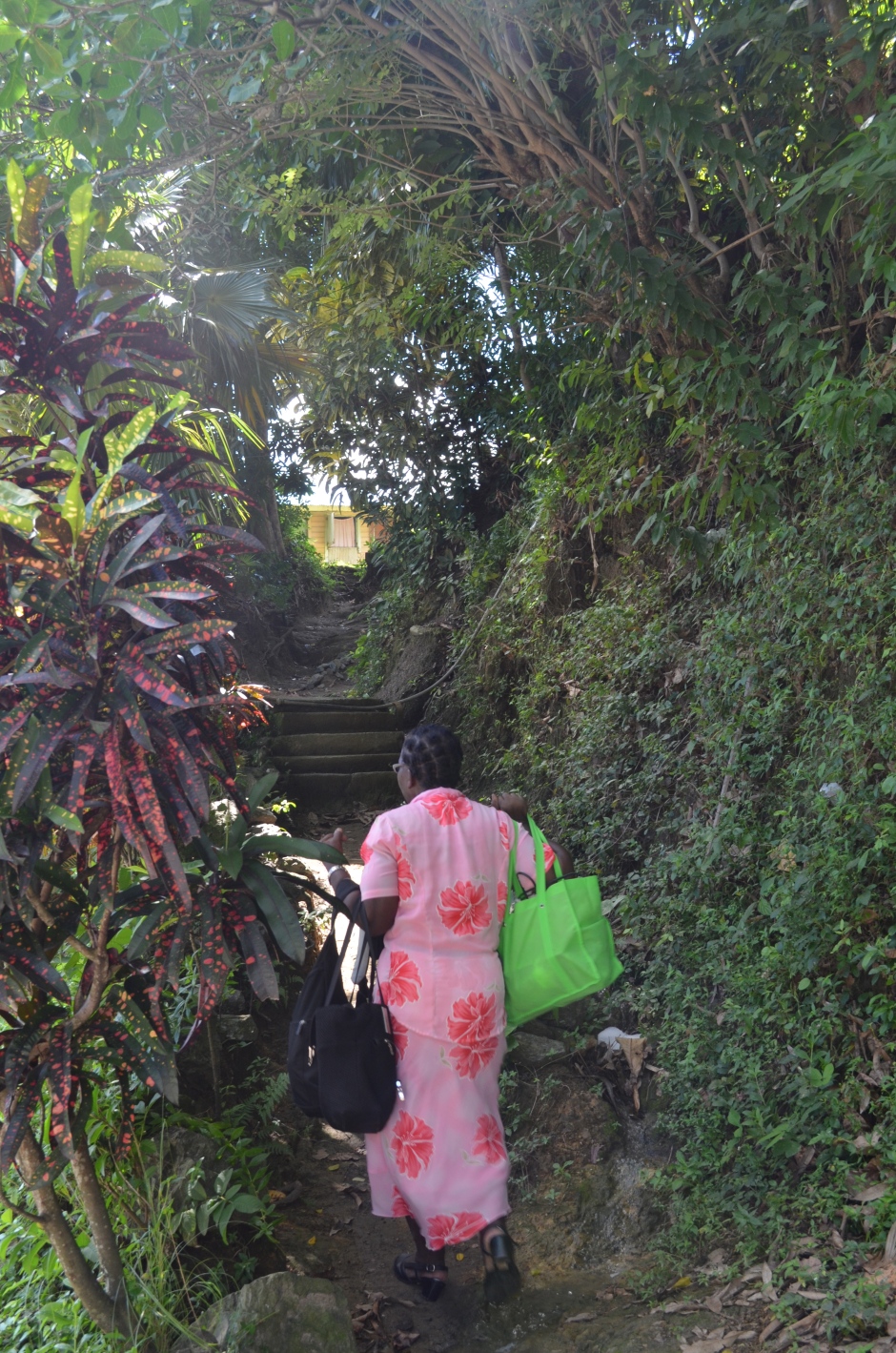 as I helped her with her bags, I couldn’t help but notice an iron in one of them.

She likes to bring it when she visits her sweetie for the weekend.

Make sure his clothes are crisp and creased.

Before her pale pink flowered dress got swallowed up by the millions of shades of green in her forested yard, she turned and said,

And then there was Wordsworth Frank.

He was happy to pose for this picture; he told us he dreams of being a flim stah.

But in the meantime, he enjoys life to the fullest every day.

where people say Ian Fleming wrote much of the James Bond Series.

You can even eat in a Tree House Restaurant!

Frankly, If I see that chicken again,

I would advise her if she is coming from Trinidad, to take a plane to Tobago instead of crossing the road.

It is only a 20 minute flight.

We hopped on the plane Friday evening, and after this very short flight,

we took a very long winding drive through streets which follow the hairpin and often very steep hills and mountains, 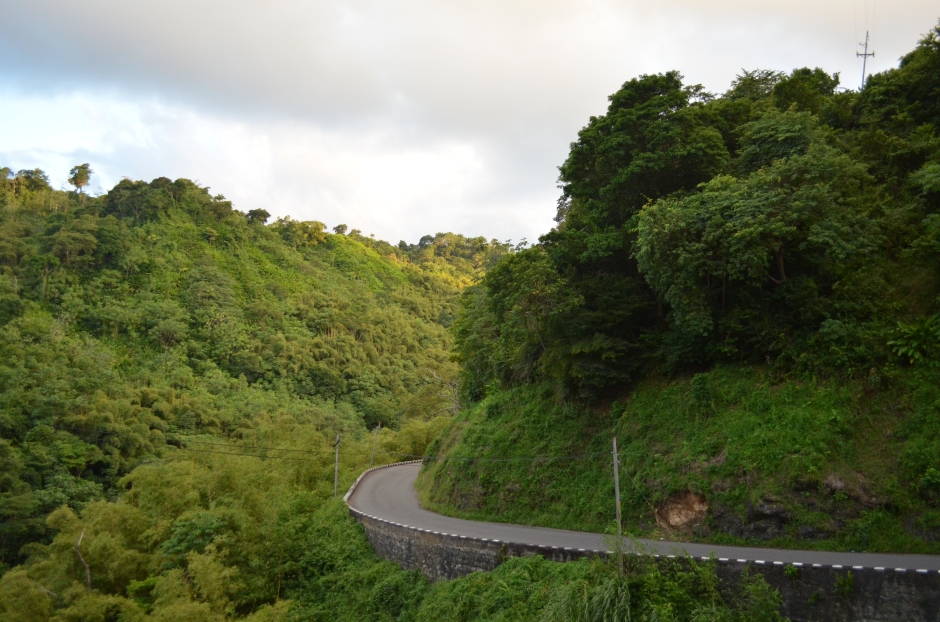 until we got to Speyside, located on the eastern tip of Tobago.

Junie and Elias were there to get their scuba certification, Nicole and I were there, along with some friends, to see understand why the chicken crossed that road to come to such a place.

It didn’t take us long to find out. While father and son donned their flip flops and scuba gear, 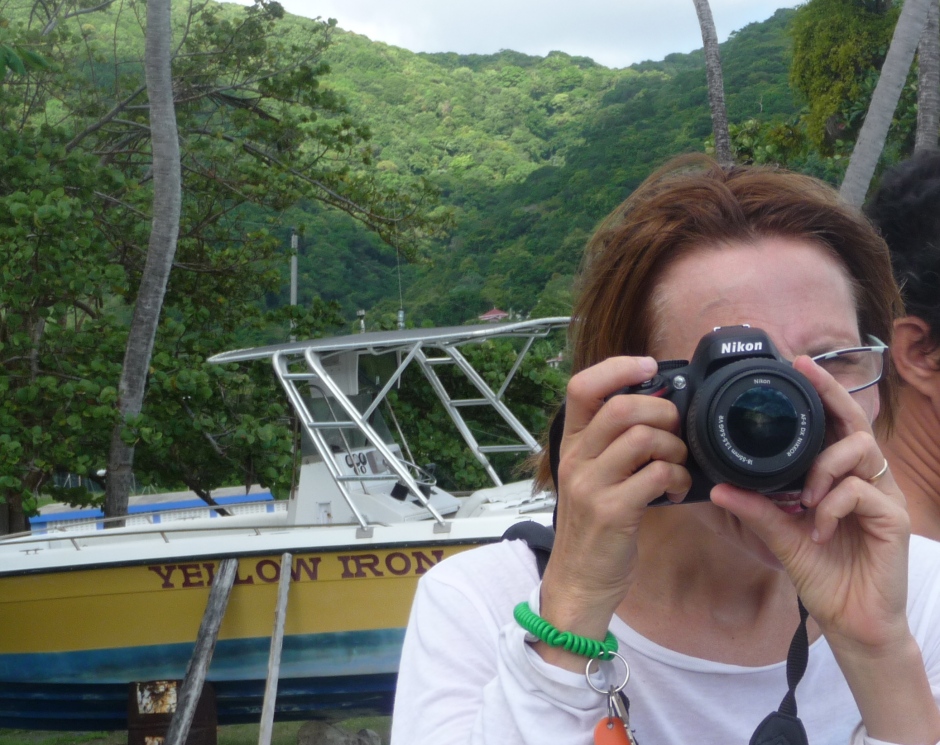 We documented the beginning of the scuba adventure, 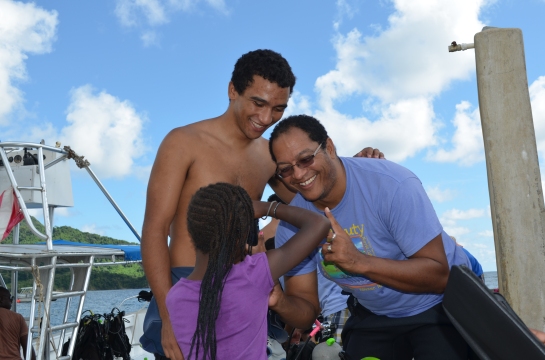 all the technicalities involved in making sure everyone’s equipment is ship shape,

on board they go, 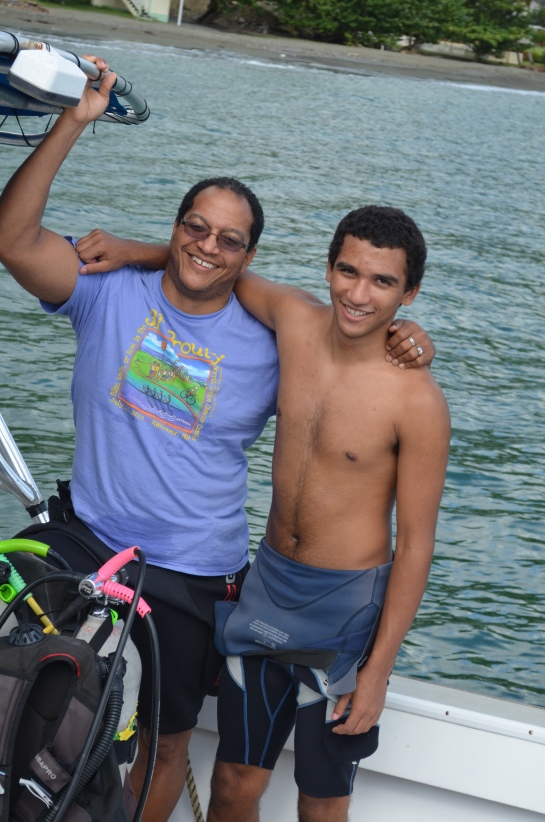 on their way to explore beneath the sea 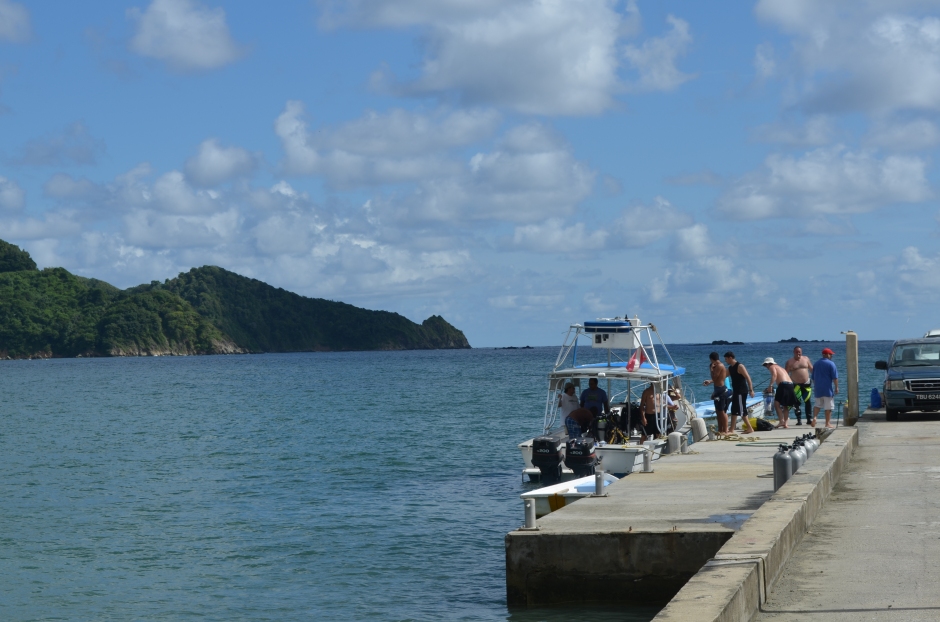 while we went to explore Tobago by land.

Nicole and her buddy counted each of the 89 steps to Pirate’s cove.

Then they played on the sand, apparently their were some kind of guardian angels running around with them.

Maybe these were the same ones that led us to the 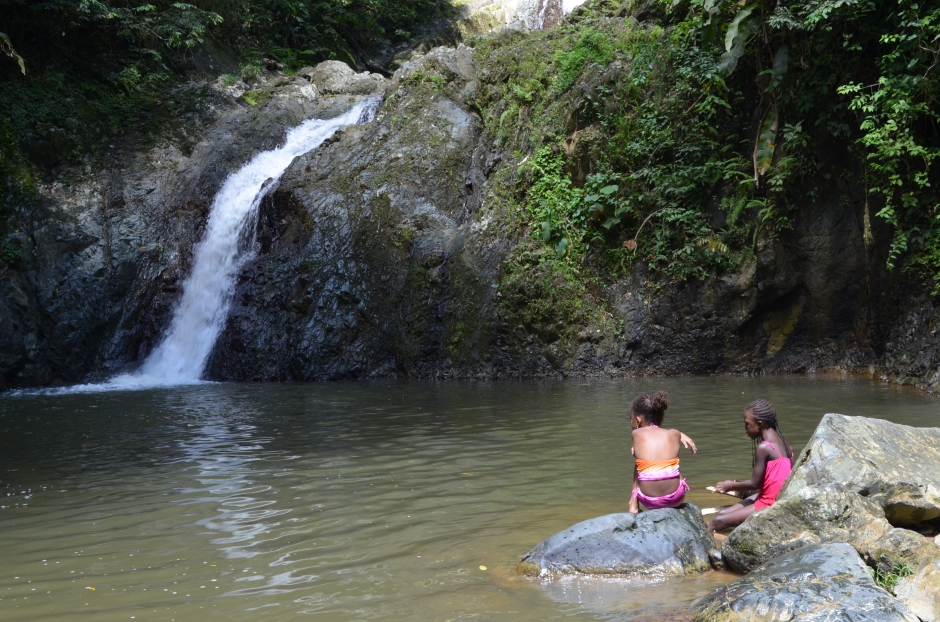 where bamboo can be as coveted as polly pockets.

We all found ourselves opening up to the fairy energy that is said to be underfoot. 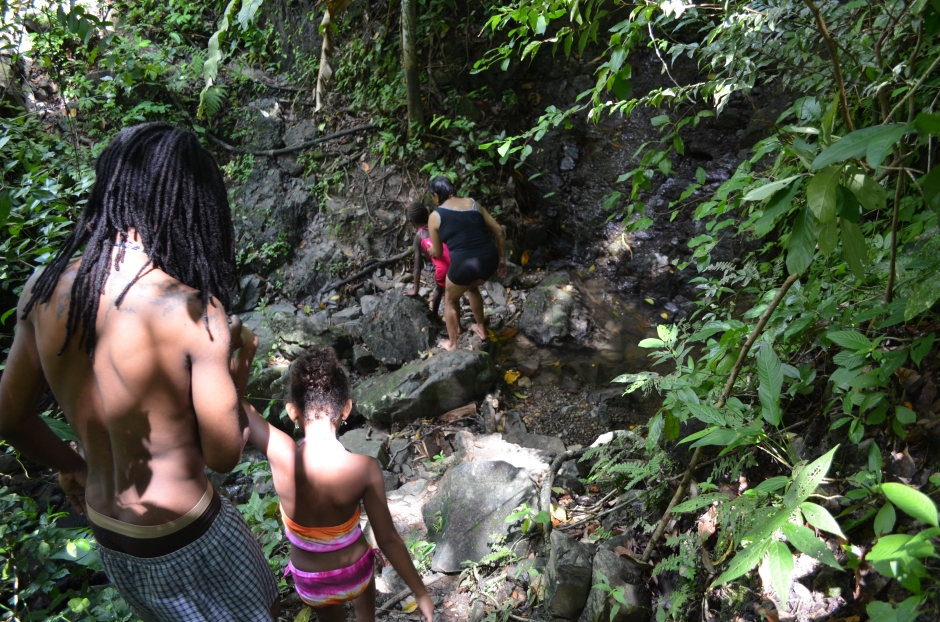 We hiked up the steep winding path that brought us to the second strand of waterfalls,

where we met a barber who has long beautiful dreds that he exclusively washes in this pure, clean water.

I’m not sure if it was the fairies doing their thing, or the pure clean water in our hair, but we were sure feeling the bliss. 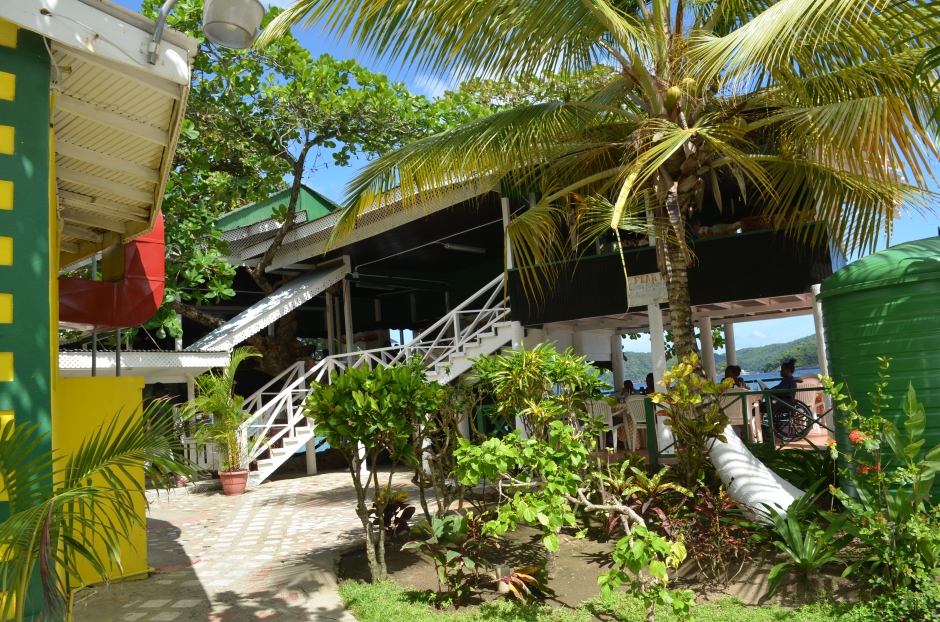 The path took us right to Gemma’s Treehouse restaurant.

I think the same fairies must have helped with making the food at Gemma’s tastier than anything. 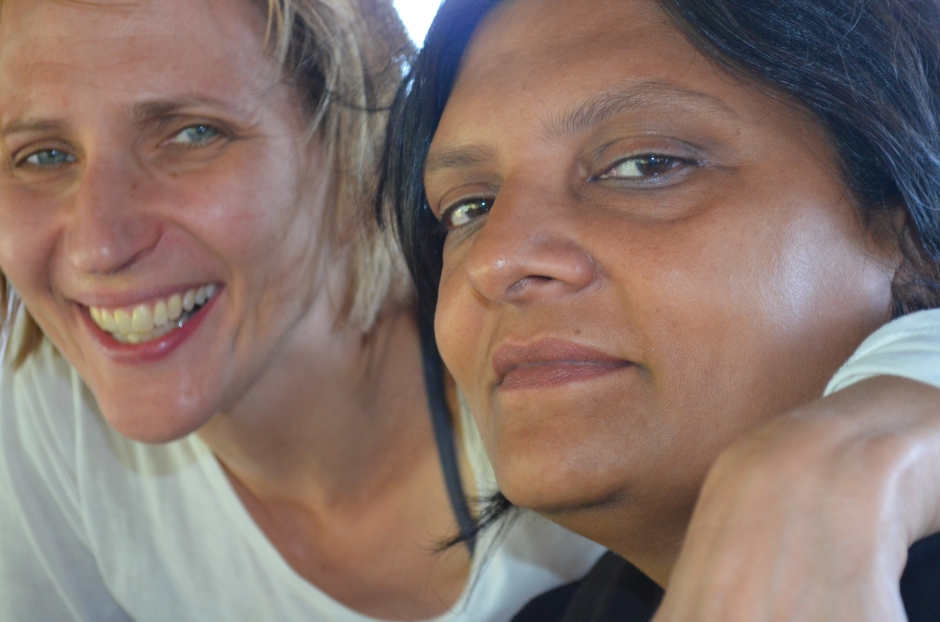 The company of new friends helped to enhance the flavor,

as did the visits from the grackles. 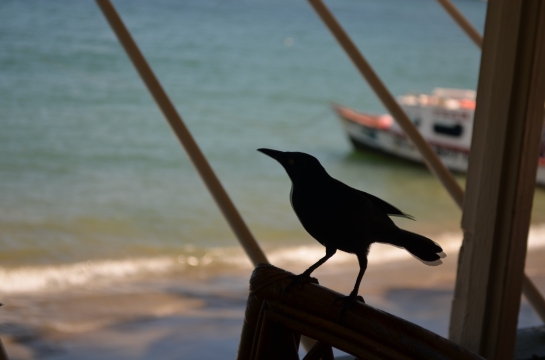 There were a couple of suspicious customers, 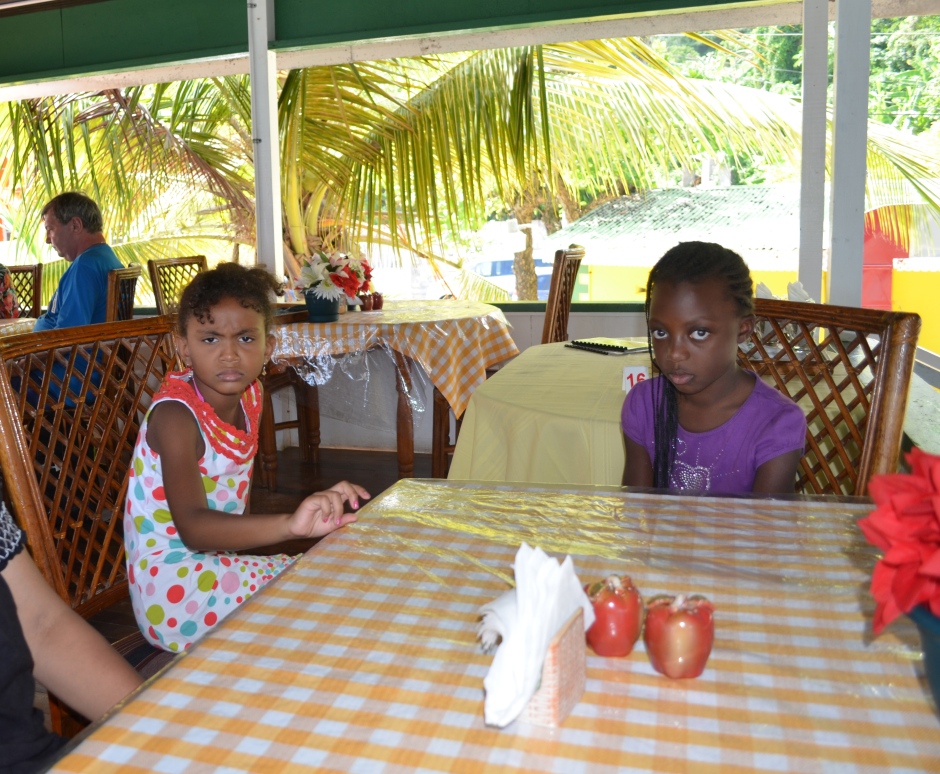 But after really looking at the menu, 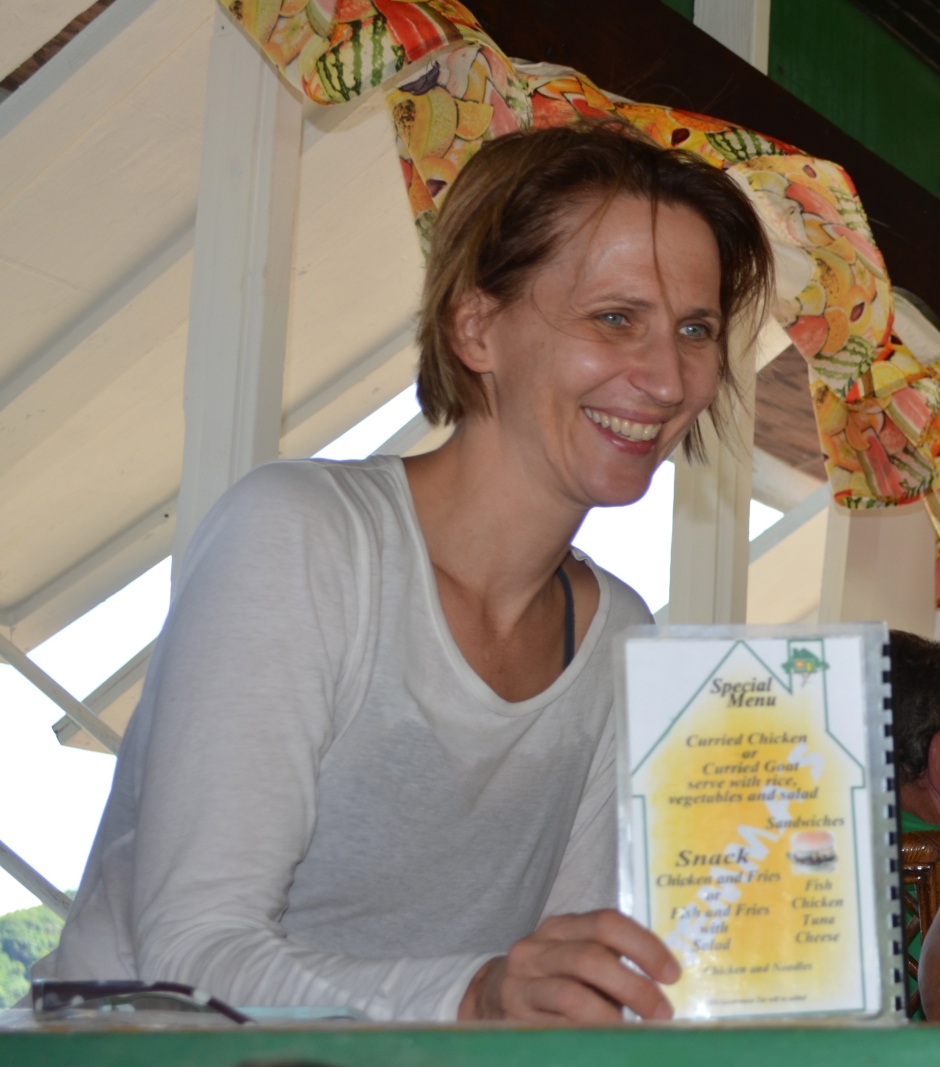 we ordered, and I think satisfied wasn’t the word.

Upon seeing the curried lobster, curried chicken, and breadfruit casserole in front of us, 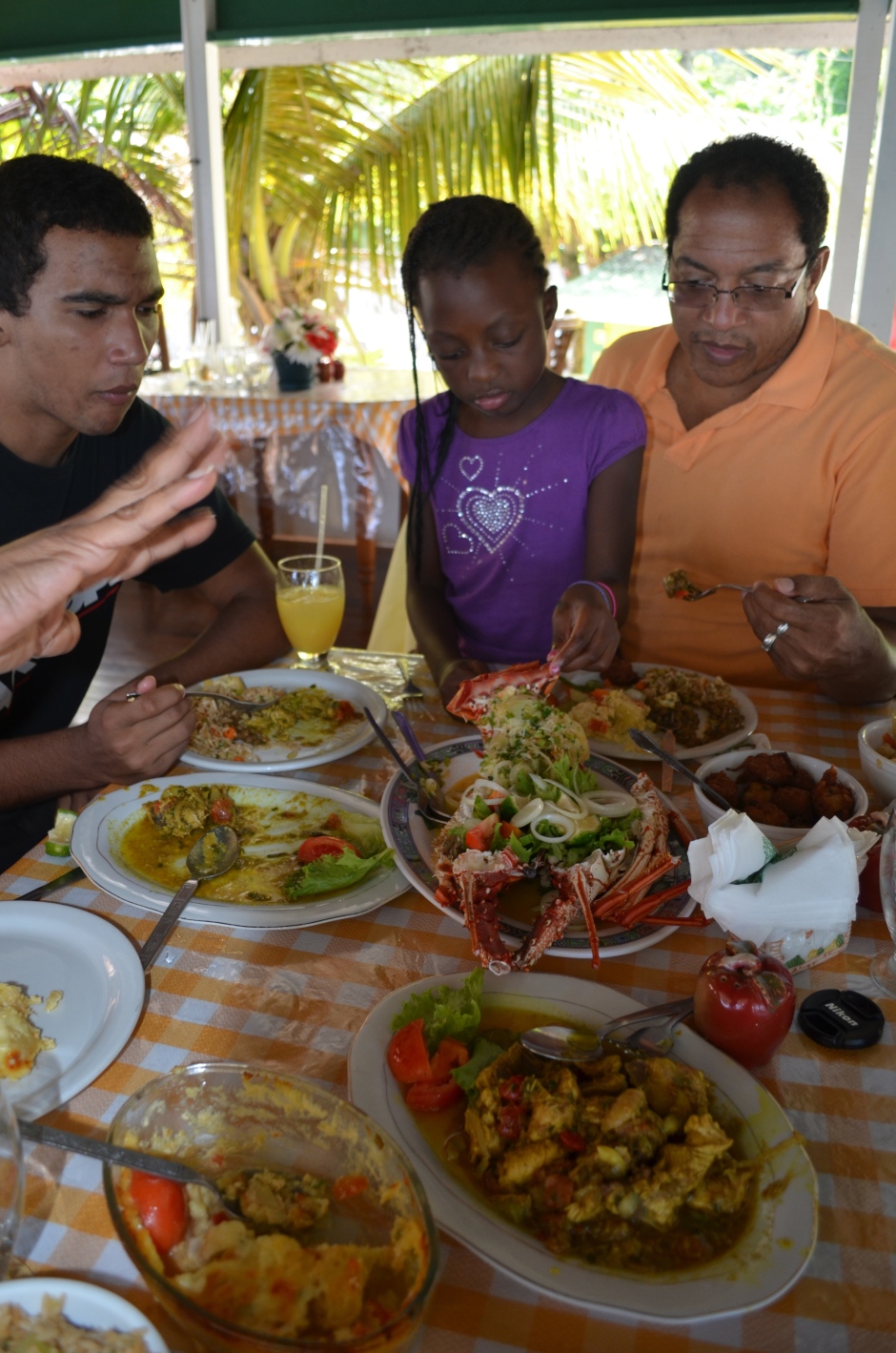 We enjoyed a feast fit for royalty.

So, there were so many reasons, we found out after a jam packed weekend in Tobago, for the chicken to cross the road.

But maybe when it all comes down to it,

it was simply because a bird in the hand 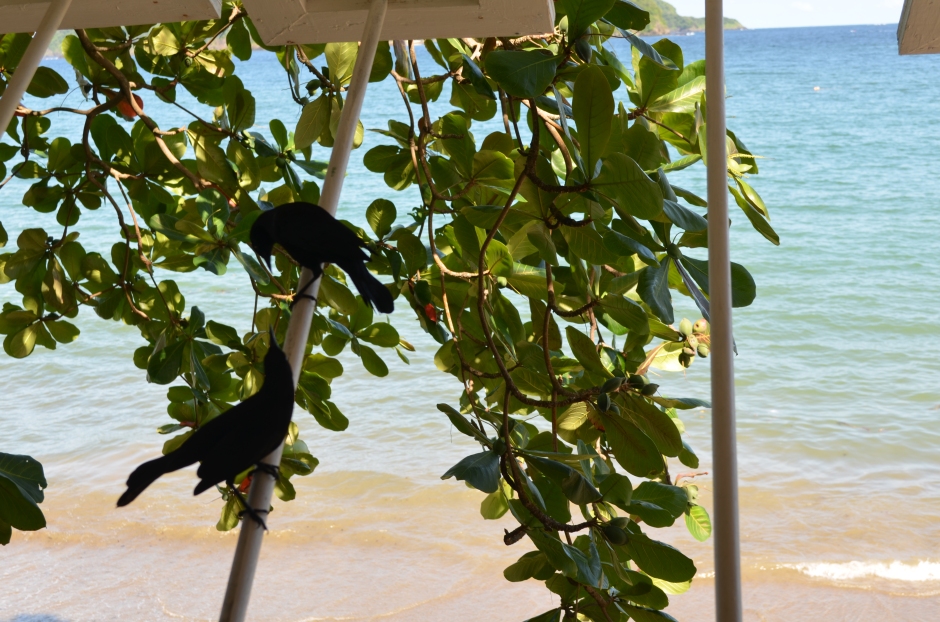 5 thoughts on “The Sister Island.”